A Mould Bomb Is Coming

Usually, I am hesitant to write about issues that could be seen as a fear-mongering warning, but in this case, I don’t think I have a choice. There is a mould bomb coming for every housing provider in the UK and unfortunately, it has teeth. Fitness f...

END_OF_DOCUMENT_TOKEN_TO_BE_REPLACED

This week we're going through the best housing posts of the week. There are definitely a few organisations in housing who understand social media. 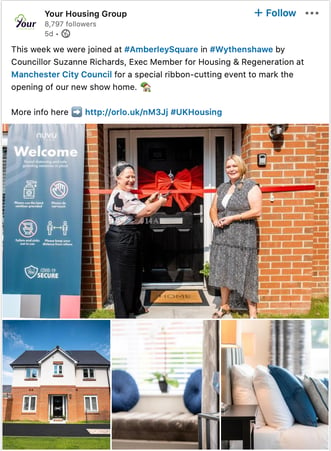 This is a great post. What could have just been a boring picture of the inside of a showhome with a link to go find out more about the development instead is turned into a celebration. The ribbon-cutting with a ‘special guest’ is a brilliant way to announce the opening of a new development. It’s also nice to see that they have been named. It’s a fun way to draw attention to the new homes without being too sales-y. There are enough photos to get an idea of the style (internal and external) of the development which is good but not too many that you don’t need to follow the link for more and they’ve made the ribbon-cutting image the focus of the post. This is a great way to go about announcing your properties and we hope to see more soon. 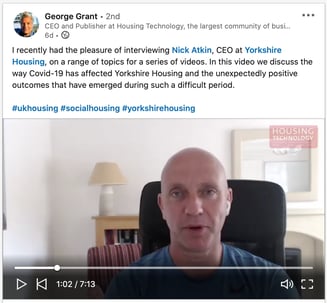 This post goes to show the power of video. What might have been a rather unengaging long-form blog post became significantly more engaging because of the visuals. LinkedIn has, for the last year or two, began prioritising native video (video that is directly uploaded to its platform) over most other types of content. If you are looking to get the largest native reach for your LinkedIn content, consider making it a medium-length video and uploading it directly. Clearly, George understands this and his video has benefitted enormously from this. Another big positive is tagging the participants (in this case Nick Atkins). This again improves reach and also allows Nick to respond directly to any comments on the post via notification. 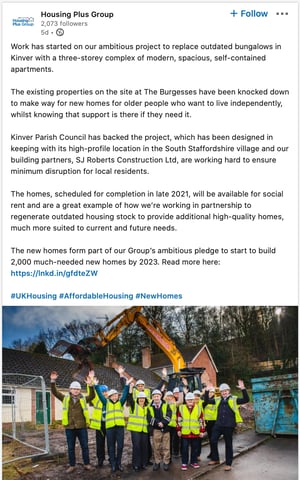 This is another great development post, although this time earlier in the process! Two things make this a brilliant post. Firstly, the text in the post succinctly explains what is happening with the site without going into too much detail. It also highlights the local support they have had in moving the project alone. It’s a great way to highlight the good whilst quelling any local fears about the disruption caused by the development. The second great thing about this post is the photo. The best posts this week have all featured relevant enaging media and this is no exception. The picture shows the whole team - and is a great way to remind local residents that there are real people behind the corporate branding. It can be easy to forget when doing corporate social media, but residents want to know that housing providers aren’t just faceless corporations. Any opportunity to show the behind-the-scenes side of social housing is one you can’t miss. 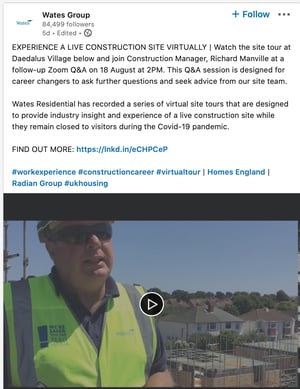 Another great example of video use is from this post. This time it's from Wates Group and is a recruitment post to highlight the benefits of working in construction. We're very impressed with this as it's an extremely engaging way to get people to think about a career in construction! It’s a true-to-life walkthrough of a construction site. Instead of using a standard image looking for recruits, they’ve taken the initiative and thought of a more creative way to show off the job. This is also an innovative way of getting around the lack of access to sites during the lockdown. We’re taking notes for our next recruitment drive, although I suspect a live walkthrough of our offices doesn’t have the same level of pizzazz as a walkthrough of an active construction site!

This is our final piece for the week. Again, it’s a video piece - but this time with a twist. Instead of just relying on a written guide to the new Building Safety Bill, they went ahead and produced a video introduction to go along with it. Natively embedding this video has massively increased their LinkedIn reach and likely increased the conversion rate to their guide as people look to find out more information. It’s a great way to take advantage of the LinkedIn video bias to improve the effectiveness of your lead-generating content. The style adopted isn’t particularly difficult to achieve either - with video creation tools like Biteable making it simple. Next time you're releasing a guide think about doing the same.

Residents Are Struggling To Contact Their Housing Providers - But Why?

It might seem odd to claim that residents are unaware of the housing provider who maintains their home, but it’s an issu...

END_OF_DOCUMENT_TOKEN_TO_BE_REPLACED

As we start to get the coronavirus outbreak under control, now might be a good time to examine how communication with re...

END_OF_DOCUMENT_TOKEN_TO_BE_REPLACED

With so many conversations going on at the moment surrounding the importance of digital communication and personalisatio...